Ayam Cemani is a rare breed of chicken that is known for its dramatic all-black appearance. While it’s typically a hardy breed, this gorgeous bird needs special care if you want to keep it healthy and happy. Here’s what you need to know about Ayam Cemani care to ensure your new flock thrives for years to come.

The Ayam Cemani breed originated in Sumatra, Indonesia, where it’s rumored to have magical capabilities that connect the living with their ancestors and is considered a good luck charm! The breed is famous for its all-black feathers, face, and skin (some feathers will have a blue/purple iridescence under certain lights).

Its crow is distinct and is actually used as a foghorn on boats, even today!

They’ll live an average of 6- 8 years and are considered intelligent, friendly birds with an even temperament.

Despite their goth look, the Ayam Cemani has a gorgeous iridescent sheen under bright light, with some referring to it as “peacock-like.” The most-prized chickens have black matte coloring on their feathers, eyes, wattles, and combs. 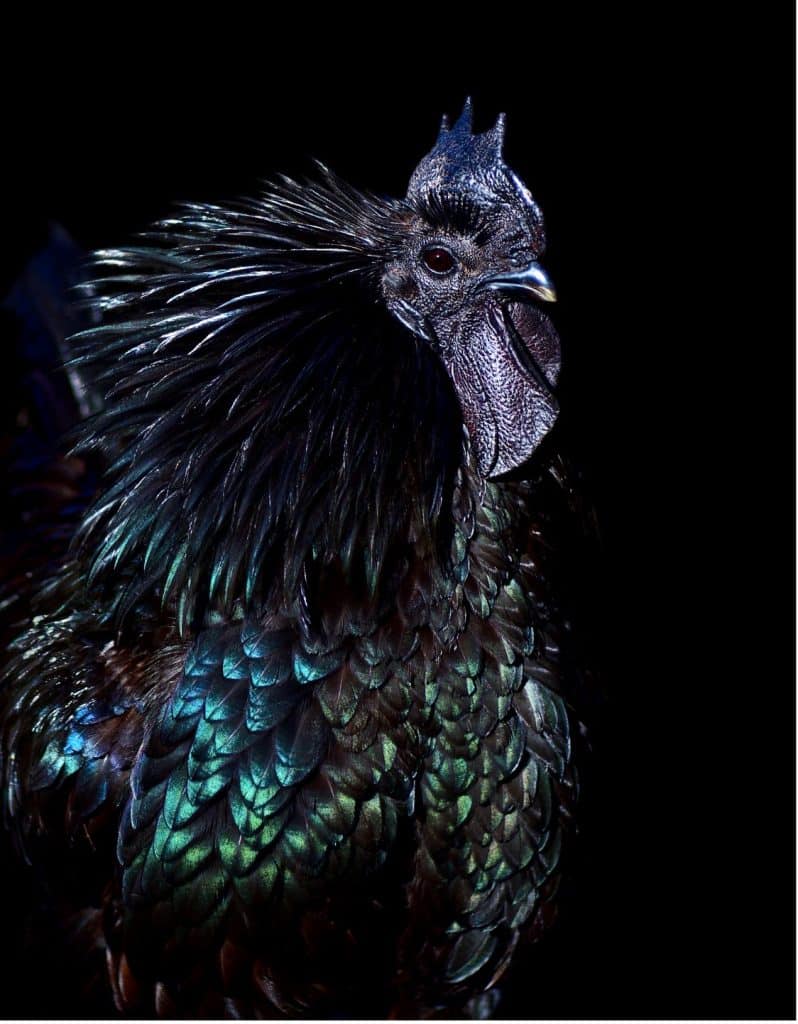 The roosters are typically around 5 – 6lbs, while the hens are slightly smaller, usually around 4lbs. Their eggs aren’t black but instead a muted pink or cream, and hatchlings take around 21 days to come out of their shells.

The most prized (and therefore, most expensive) birds are entirely black, with waiting lists that can be years long! If you’re less picky or on a budget, consider looking for “lower grade” Cemanis, as it’s common to find “lesser” quality birds with grays, greens, and blues throughout their feathers or comb.

Despite their broad chests and muscular thighs, these chickens are rarely raised for meat.

The Ayam Cemani breed is a fairly relaxed bird, but they’re not considered “cuddly.” Many families have reported their flocks were tolerant of human kids and were able to be hand-fed easily.  However, they appear to have good maternal instincts and will protect their young if they sense a threat.

They are considered an intelligent breed and can recognize their owners.

When it comes to caring for your Ayam Cemani, you’ll want to keep in mind that they originate from Indonesia, so they are relatively heat-tolerant. Surprisingly, though, this breed seems hardy in winters, too, so long as their coops are well-maintained.  Make sure they have plenty of fresh water and a warm place to sleep and don’t expose them to extreme temperatures. They also need plenty of food, including fresh fruits and vegetables.

A minimum of 4 square feet per bird is necessary for a comfortable and healthy coop. Ayam Cemani should be allowed access to the outdoors often, but ensure their area is covered when it rains or snows.

Since the Ayam Cemani is a medium-sized bird, many of our coop options are excellent choices. If you plan to have a small flock of 2 – 10 chickens, the Lean-To and Tractor models are great ways to get started keeping Ayam Cemani chickens. 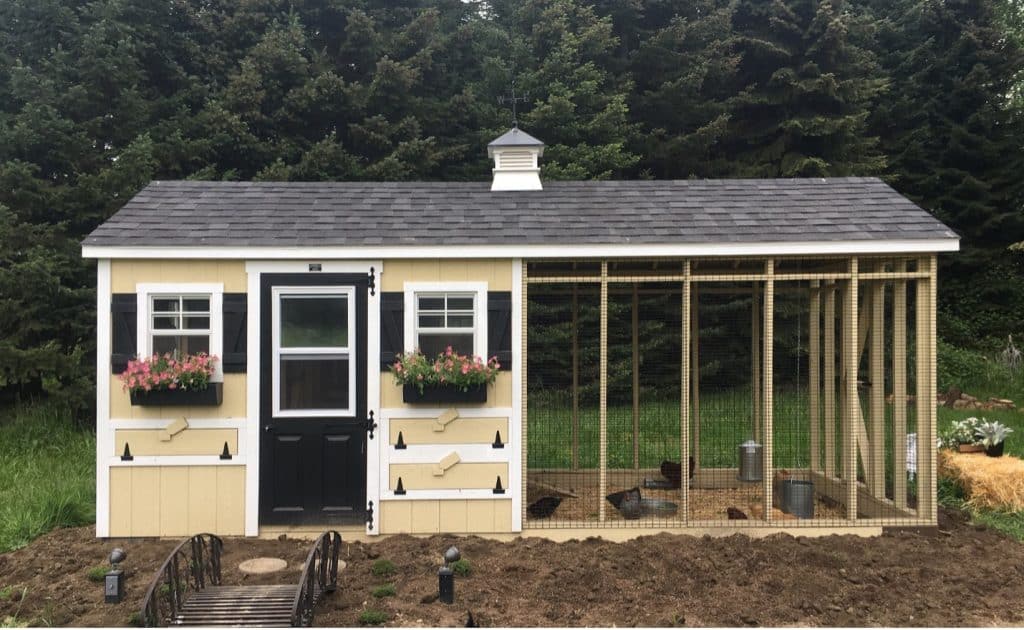 However, if you want to give them the best experience with maximum space that lets your flock grow organically, consider the Combination coop with an included fenced-in run area that gives them the room they need to feel happy without worrying about predators or weather.

These hens aren’t significant egg layers, usually clocking in around 80 eggs per year, and seem to have cycles where they’ll take a break after 20-30 eggs that last around three-to-six months. A coop with at least six nest boxes, such as our popular Quaker model, would be perfect for a starting flock.

Despite being considered excellent mothers to their young, Ayam Cemanis aren’t typically big on nesting, so you’ll probably need to incubate eggs artificially, maintaining a temperature of around 99.5F (37.5C) degrees with humidity around 50% – 55%, increasing it to 60% for the last few days of incubation.

While they originate from tropical climates, Ayam Cemani is a hardy bird that can handle a broad spectrum of seasons. The key to keeping a flock during winter is ensuring their coops maintain a consistent temperature that’s dry and warm. You may want to consider adding an Electrical Package with the Heated Roost option to your coop build that ensures you’ll be able to keep the perfect temperature year-round.

Opinions vary on whether or not this breed should be considered “flighty” as it often comes down to the individual bird. However, it’s always a wise idea to keep a fenced-off area that prevents them from getting away and makes it difficult for predators to get in, so consider adding a chicken run that’s directly attached to your coop.

Since the Ayam Cemani is an easygoing bird, many of the amenities we recommend help you maintain the flock easily. Adding automatic doors allows you to automate their routines with wifi or on a timer, a perk that comes in handy during brutal winters! Litter trays and feed rooms go a long way toward streamlining your chicken’s care and are no-brainers for those serious about maintaining a flock for many years. 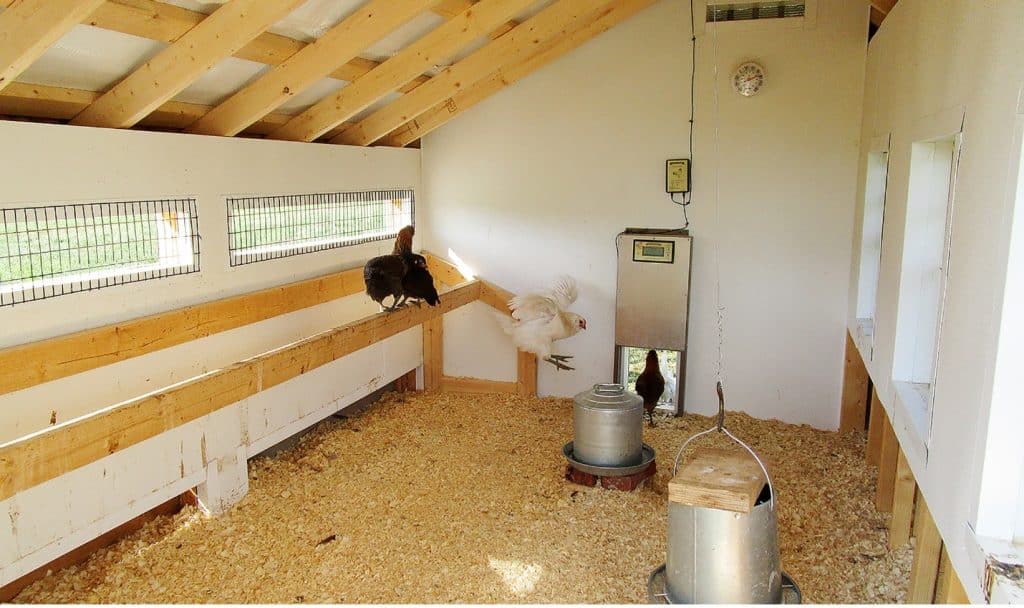 The Ayam Cemani breed is a showstopping bird that’s docile, friendly, and intelligent. If you’re interested in keeping a flock of these gorgeous chickens, ensure they have ample space to run and a warm, cozy coop that gives them the perfect environment to lay their eggs.

If you’re ready to care for an Ayam Cemani flock but aren’t sure how to get started, we’re here to help! Check out our current stock of readymade coops, or contact us to build a customized coop designed for this unique breed of chicken. 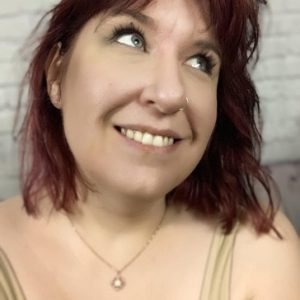 Megan is a 5x award-winning marketing strategist and pet nerd whose work has been featured in over 100 publications including the New York Times, Huffington Post, and Good Housekeeping. She and her rescue dog Jimmy Bagels now spend their time in Upstate NY exploring nature and helping other pet owners learn ways to create their best life possible.
All Posts
PrevPreviousDong Tao Care Guide
NextOnagadori Care GuideNext